The Diocese of Rockford was established on September 27, 1908 by Pope Pius X. with the Apostolic Constitution Quae rei sacrae from cessions of territory of the Archdiocese of Chicago and subordinated to this as a suffragan . On December 11, 1948, the Rockford Diocese gave parts of its territory to establish the Joliet Diocese in Illinois . 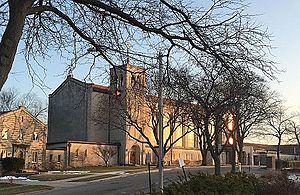 Cathedral : Saint Peter in Rockford
Archdioceses and Dioceses in the United States