Overath is a medium-sized district town in the Rheinisch-Bergisches Kreis in the south of North Rhine-Westphalia . The village was first mentioned in 1060.

The main town is about 25 kilometers east of Cologne in the Aggertal in the Bergisches Land . The other locations are in the Aggertal, in the adjacent Sülztal and on the surrounding hills.

The highest point of the urban area, and also of the entire Rheinisch-Bergisches Kreis , is 348  m above sea level. NHN the Kleine Heckberg near Federath .

In addition to the main town with around 8,000 inhabitants, the city of Overath includes the following districts:

Further localities are the districts:

The Steinhof, now a restaurant, is one of the oldest branches in Overath. The current building dates from 1662.

When it was first mentioned around 1065, the place was called "Achera" (after the Agger ). Presumably because of the settlement on the Aue clearing, the name changed to "Ouerode" (around 1280), "Ovverode" (1304), "Overadt" (1582), and finally to "Overath". At that time, the Archbishop of Cologne in Anno II transferred the court association Achera - divided into Oberacher ( achera superior ) and Unteracher ( achera inferior ) - with all accessories to the Siegburg Abbey he had founded , making the Abbot of Siegburg lord and liege lord in Overath. Anno had acquired Ober- and Unteracher from the bishop of Utrecht and from a count Konrad by exchange. In 1363, after previous pledging of the rightful in 1311 and the lower jurisdiction of Overath and Altenrath to Count Adolf VI. von Berg , by transferring the office of Löwenberg to the Counts of Berg. After that, Overath belonged to the Duchy of Berg , after the Bergisch office division Overath was assigned to the office of Steinbach .

The district of Cyriax was founded as a cloister courtyard by the Siegburg monastery or was given to it. The farm is about 1.5 km from the city center in the immediate vicinity of the Overath school center (with grammar school , secondary school and secondary school ). Today there is no more agriculture , but the farm and the properties are still preserved.

The oldest known travelogue from Overath is from 1591. Arnoldus Buchelius (1565–1641) reports in his diary a. a. about the stations of a trip on the Brüderstraße , on which he stayed in Overath:

"I saw a beautiful lead-roofed church, a silver-clear river in which there were a lot of trout, the Agger, a castle planted with beautiful trees owned by the nobles of Bernsau and a wonderful, sweet girl, a real feast for the eyes."

Overview of the core city

Population figures according to the respective area. Values ​​up to 1970 come from the census . Values ​​from 1975 onwards come from the official update of the administration and refer to the city ​​area enlarged in 1975 by the Cologne Act § 10.

The city ​​council has 44 seats and is elected every five years.

The city of Overath's debts as of December 31, 2012 amounted to 101.44 million euros (3790 euros per inhabitant). As one of the first municipalities in Germany, the city of Overath voluntarily adopted a so-called sustainability statute for the area of ​​urban finances on December 10, 2014 , through which the city aims to prevent a further increase in debt, reduce existing debt and make it permanent ensure the city's financial performance and ability to act.

The Overath coat of arms has existed since March 5, 1938.

Overath is twinned with the city of Pérenchies in France and with Colne Valley, an urban district of Kirklees in England . The Franco-German partnership was sealed in 1973 by the mayors Josef Büscher (Overath) and Roger Dutriez (Pérenchies).

The ruins of Großbernsau Castle are near the federal road 55 from Overath in the direction of Engelskirchen in a freely accessible forest and can be visited at any time.

The local Catholic church is dedicated to St. Walburga . Until 1803 there was a monastery settlement of the Benedictine abbey of Michaelsberg in Siegburg in the Cyriax .

The Marialinden district is a place of pilgrimage to Mary . There is the pilgrimage church of St. Mary's Visitation .

The Evangelical Reconciliation Church is located in Kapellenstrasse in the main town of Overath .

In the Neichen district you will find the Peace Church of the "Free Church Overath".

The mosque of the Islamic culture and development association is located in the hammer mill.

In the district of Steinenbrück there is a congregation of the New Apostolic Church .

The Karate-Do Overath e. V. has been offering Shotokan Karate in Overath since 2001 .

Numerous clubs shape the music scene in Overath. The men's choir and the “Edelweiß” drum corps are firm fixtures in Overather's club life and are also involved beyond musical activities. Another big name is the Big Band Overath under the direction of Dirk Pawelka , which is now known far beyond the city's borders.

The Whitsun YuAi ( Japanese : friendship meeting) is the largest popular karate sporting event in Germany. It has been organized by the North Rhine-Westphalia karate umbrella organization since 1991. The organizer has been Karate-Do Overath e. V.

The Overath Rockcity Open Air Festival has been taking place in Overath once a year since 2004. After a break in 2007, the fourth edition of the music festival took place on August 16, 2008 in Overath Cyriax.

The Cologne / Bonn airport is accessible by passenger cars in about 25 minutes.

Due to the favorable traffic situation to Cologne and Bonn, many commuters live in Overath.

Overath is on the Aggertalbahn (KBS 459). The Oberbergische Bahn (RB 25) runs every half hour to Cologne and Engelskirchen and continues via Gummersbach and Meinerzhagen to Lüdenscheid every 60 minutes. The travel time between Overath and Köln Hbf is around 35 minutes.

In local road transport , bus routes run from Overath train station to the districts of Heiligenhaus, Marialinden, Steinenbrück, Untereschbach and Vilkerath and on to Gummersbach , Bergisch Gladbach , Siegburg and Much . A citizens' bus runs from the city center to the surrounding urban areas that are not served by buses.

Overath belongs to the tariff area of ​​the Verkehrsverbund Rhein-Sieg (VRS).

Overath is served by the A 4 with two junctions , "Overath-Untereschbach" and "Overath". The “Aggertal” motorway service station is located near the “Overath” junction .

The B 55 crosses the city area. Coming from Cologne today it leads to the Overath junction via the A 4 and from there as a separate road to the east. The former route of the B 55 met the B 484 within the village of Overath , which begins there. Today the connection between this intersection and the Overath junction belongs to both the B 55 and the B 484.

An old trade route from Cologne to Siegen , the Brüderstraße , ran through the districts of Untereschbach , Steinenbrück , Heiligenhaus , Overath itself, the locations Burg and Landwehr and the district of Marialinden through the urban area.

In addition to the many hiking trails of the Sauerland Mountain Association and other organizations, the Way of St. James leads to Santiago de Compostela , coming from Marburg, with the next stage destination Cologne through Overath. At the Catholic parish church of Sankt Walburga there is a stele of the Jacob's Brotherhood and in the tower of the church there is a pilgrim's stamp. The opposite direction is signposted as the Elisabeth path, a pilgrimage route coming from Cologne in the direction of Marburg.

Dienes Werke GmbH & Co. KG has its headquarters and development department in Overath. It has existed since 1913 and today with over 400 employees - 200 of them in Overath - manufactures a wide variety of products for industrial cutting applications.

Karl Scharrenbroich GmbH & Co. KG has two production facilities in the city. The main plant is still in Overath itself. In metal processing, the company acts as a specialist in fineblanking technology, primarily as a supplier to the automotive industry.

Soennecken has relocated the company headquarters to Overath since 2007.

The Rhenish Office for Ground Monument Preservation has a branch at Gut Eichthal . 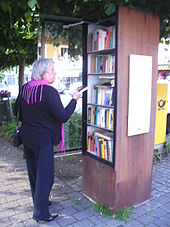 The bookcase is used a lot

As an institution of the Catholic parish of St. Walburga in cooperation with the city of Overath, the St. Walburga city library is responsible for the general supply of information and literature. It is located in the city center on Steinhofplatz and has over 40,000 visitors a year. The media range includes 20,000 books, magazines, audio books, music CDs, CD-ROMs, DVDs, videos and board games. The offer also includes two internet workstations and online interlibrary loan. The promotion of reading for children occupies an important place in the range of events. The inventory catalog and further information can be found on the library homepage. (Status: July 2006)

There is a school library at the Cyriax school center.

Since 2011 there has been a public bookcase on the square in front of the Kulturbahnhof .

Overath does not have a hospital. Medical care is provided by the hospitals in the neighboring towns of Bergisch Gladbach (Bensberg) and Engelskirchen.

Personalities who have worked in this city

Cities and communities in the Rheinisch-Bergisches Kreis

Districts and districts of Overath