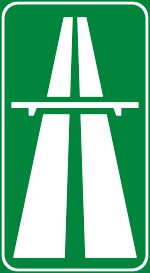 This list provides an overview of the network of motorways in Italy . The total network has a length of 6,758 km, of which 5,695 km are operated by 24 licensed operating companies and 900 km by the state road operating company ANAS itself.

This article or section needs to be revised: Outsource the historical part to an article to be created Motorway (Italy) . Articles starting with "List of ..." are list articles and should therefore be limited to a list.
Please help to improve it , and then remove this flag.

On September 21, 1924, Europe's first motorway opened in Italy. The route, which is now classified as the A8 , was part of the Autostrada dei Laghi , which was built by the Italian engineer Piero Puricelli. He also planned to build a motorway network that would connect all of Italy's major commercial centers. The fascists, who came to power in 1922, used the motorway construction for their propaganda. Benito Mussolini said of the motorway in 1925: "The motorway is a great Italian achievement and a sure sign of our engineering spirit, not unworthy of the sons of ancient Rome."

In 1933 there was already a motorway network in Italy that was 457.5 km long, the 50 km long route between Genoa and Serravalle was under construction (today A7 ). The Autostrada Pedemontana , today's A4, was completed in 1933 between Venice and Turin . Other early highways in Italy were today's A11 , which was built within a year and opened on August 26, 1933. In 1932 the Turin- Milan section was opened , and in 1929 between Naples and Pompeii .

These motorway projects were financed by private motorway companies, for whose liabilities the state provided guarantees.

Overview of the network

A distinction is made between the following street categories:

The numbering of the motorways in Italy does not follow a geographical logic as in Germany , but a strictly sequential one. Ordinary highways between the major cities of the country are numbered between 1 ( Milan - Naples , Autostrada del Sole ) and 34 ( Villesse (A4) - Gorizia -Sant'Andrea). Smaller branches ( ital . : diramazioni ) he deals with connecting routes between two other motorways: however, they have double numbering ( e.g. A11 / A12 as a motorway connection between the A11 and A12 motorways ).

In contrast to systems common in France, it is not immediately clear whether the use of a motorway is subject to a toll .

At 760 km in length, the A1 is the longest and most important motorway in the country. It is about 20 km longer than the A14 , which runs along the Adriatic coast . The Autostrada A34 is 17 km long and is currently the shortest motorway.

The city bypasses, often designed as ring motorways , have their own number in Italy. Like the highways, the numbering follows a sequential logic and neglects the geographical location of the bypasses. The most important and busiest tangents are around Milan (combination of the A50 , A51 and A52 motorways ) and around the capital Rome ( A90, or Grande Raccordo Anulare (GRA) ). The length of the bypass varies greatly from city to city. For example, with the A55 , the north-western Italian city of Turin does not have a “real” bypass, but rather a collection of several branches that is officially run as a single motorway.

Furthermore, the cities of Bologna (RA1), Reggio Calabria (RA4) and Catania (RA15) also have tangents. However, these are not classified as motorways, but as feeders .

A motorway feeder ( Italian : raccordo autostradale ) is the name given to roads in Italy that connect larger cities or other important areas that are not directly connected to the motorway network to a motorway in the most direct way possible. Of the 17 feeders currently in existence, four are classified as “similar to a motorway” (green signs) and twelve as belonging to the “normal state road network” ( viabilità statale ordinaria ) (blue signs). The RA7 is the only one that is signposted and guided as a real motorway ( A53 ). The designation "RA7" appears exclusively in the internal use of ANAS .

The use of all motorway slip roads is free of charge .

Important single-tube motorway tunnels have their own numbering in the Italian motorway system. Of the former four tunnels ( Italian : traforo ( Sg. )) Only three officially exist, as the T3 in the province of Genoa has been downgraded. The use of these tunnels is chargeable.