The Fusca (German: beetle) . Just like in many other countries, he motorized Brazil and for many years was the most important Volkswagen model in that country. 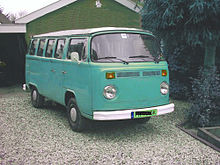 The Brazilian VW bus was a mixture of the T1 and the T2 for many years .

Volkswagen do Brasil Indústria de Veículos Automotores Ltda. is a subsidiary of the Volkswagen Group , which was founded in Brazil in 1953 . After Germany and the People's Republic of China , Brazil is the country in which Volkswagen has the largest representation. Its origins go back to 1950, when Heinrich Nordhoff , then General Director of Volkswagen, had the idea to expand the group's activities to other countries.

Over time, Volkswagen do Brasil has made a name for itself with models and variants of its own design that are suitable for various markets in South America and Africa and replace or supplement the European models there. Volkswagen currently ranks second in automobile sales in Brazil, just behind Fiat .

Volkswagen do Brasil acted as an “extended workbench” for the Volkswagen Group and manufactures the Fox for all markets worldwide in which this model is offered. The VW Golf IV was also built in Brazil for the markets in Canada and in various countries in Central and South America. In addition, the export of the Gol NF and Voyage NF models to most Latin American countries began.

VW do Brasil operated four production facilities in Brazil in 2017. The Resende plant was transferred to this division after the takeover of Volkswagen Caminhões e Ônibus by MAN Truck & Bus .

The plant is located in a suburb of São Paulo . The Gol models , the Fox for export, the Saveiro ( pick-up based on the Gol) and the Jetta are built there. The production capacity is 1300 cars per day. The following production steps are carried out: punching , body assembly , painting , final assembly, engine construction and gearbox construction. There is also a center for planning and developing new products. Approx. 16,000 workers and employees are employed there.

In the factory in this medium-sized city in the state of São Paulo, 16 different engines are built for operation with gasoline , ethanol or diesel , which are used in many vehicles in Brazil, but also in Spain and South Africa . Approx. 500 employees are employed there. This factory was the first manufacturing facility outside of Europe to receive an ISO 14007 environmental certificate in 1997 . The factory opened on October 12, 1996.

This plant is also in São Paulo. There the Gol, Voyage , up! and earlier also the Parati (station wagon version of the Gol) with a capacity of 1000 cars per day. 4000 people are currently employed in this factory. It started production on January 14, 1976.

The São José dos Pinhais plant, which is operated together with Audi do Brasil , is located on the outskirts of Curitiba . The VW Golf IV , Fox (for domestic and foreign markets), CrossFox , Audi A3 and Audi Q3 models are built there. 810 cars are made every day. They are produced by approx. 3600 employees.

History of Volkswagen in Brazil

Fuscão with a 1.5 liter engine

VW Brasília , one of the most famous models from Volkswagen do Brasil in the 1970s

The CrossFox is a model built in Brazil that, following a penchant for SUVs, is selling well in many countries. Shown here as a special CrossFox Victorinox model for Mexico.

The fourth generation Golf in a Brazilian version. In the picture: the City Golf for Canada.

In addition, the Brazilian VW subsidiary is said to have supported the military dictatorship in the persecution of opponents of the regime. Victims, trade unionists and human rights groups filed charges against Volkswagen on September 22, 2015 in São Paulo for collaborating with the repressive organs of the military dictatorship. Subsequently, the São Paulo public prosecutor's office opened an investigation into the company. In the course of these investigations it became known that the VW factory security had also politically persecuted and spied on the workforce outside the company premises. According to former CEO Hahn , the lists of political opposition members prepared by the personnel administration were only created for internal company purposes, but were nevertheless entered in the files of the authorities. Former employees testified that the security department of the VW subsidiary arrested employees themselves and held them in the in-house detention room, which the employees called the “pigsty”, until they were handed over to the political police. Arrests by the military police on the factory premises were also made possible, for example those of the trade unionist and VW employee Lúcio Bellentani . The then VW board of directors in Wolfsburg - u. a. the chairman of the board Toni Schmücker - was informed about some of the incidents, but remained inactive with regard to an investigation. In the course of the investigation, the parent company promised to provide clarification. Until 2016, the processing was carried out by the historian Manfred Grieger , employed by the Volkswagen group, who had already managed similar projects for the VW group (Volkswagen's Nazi past). The historian Christopher Kopper was then commissioned to prepare an opinion on the role of VW do Brasil during the military dictatorship. The study was published in December 2017.