Hradec Králové ( listen ? / I ; German Königgrätz ; Latin Reginogradecium ) is a Czech city ​​on the upper reaches of the Elbe in the foothills of the Giant Mountains in northeastern Bohemia . It is the administrative center of the Hradec Králové region , a university town and a bishopric . The Battle of Königgrätz between Prussia and Austria took place near the city in 1866 .

Hradec Králové is located at an altitude of 240  m nm at the confluence of the Elbe and Adler ( Orlice ) rivers in the southwestern part of the region of the same name, about 21 km north of Pardubice and 112 km east of Prague.

Königgrätz was fortified as early as 1062, was named a royal city in 1225 and in 1307 Elisabeth Richza of Poland , widow of kings Wenceslaus II and Rudolf I , was assigned as a widow's seat . Since then, the city has had the name Grecz Reginae or Hradec Králové instead of the previous Hradec (Grecz / Grätz).

In German by 1800 at the latest, instead of the correct translation König in grätz, the name Königgrätz prevailed, also as an official name.

The city was one of the first to side with the Hussites ; Jan Žižka was buried there in 1424. She suffered from the turbulent conflicts of the Hussite Wars and remained predominantly Protestant until the Thirty Years' War .

From 1574 to 1580, the White Tower (Bílá věž) was built in the Renaissance style, which has the second largest bell in Bohemia, the Augustin . During the Thirty Years War the city was conquered by the Swedes in 1639, occupied and plundered for eight months. In 1664 the city became the bishop's seat of the newly founded diocese of Königgrätz of the Catholic Church. The Jesuit Antonín Koniáš first wrote his index Clavis haeresim in claudens et aperiens there in 1729 , which, in his opinion, listed heretical works and classified them as undesirable literature. In doing so he developed great zeal, had books destroyed and brought about draconian punishments for their unauthorized possession. In his opinion, every "decent" Catholic should keep his private collection of books available for examination by the confessor . His work caused noticeable losses from Hradec Králové from the Czech cultural heritage .

During the Seven Years' War (1756 to 1763) the city was affected by clashes between the Prussian and Austrian troops. Under Emperor Joseph II Königgrätz was declared a fortress in 1778; In the years 1780 to 1789, mighty fortifications were built around the city . During this time the administration of the Königgrätzer Kreis was housed in Horziniowes Castle, and in 1792 it returned to the city after the fortress was closed.

The Napoleonic campaigns also left their mark on the city: there was a great shortage of food in 1809 due to the presence or passage of the armies of Archduke Karl as well as supplies to other Bohemian cities such as Prague and Theresienstadt , which were also preparing for fear of sieges . In 1866, northwest of the city (near Sadowa ), the Prussian army inflicted a devastating defeat on the united Austrian and Saxon armies in the battle of Königgrätz . The battle decided the German war for Prussia .

The fortifications had lost their importance in the warfare of the time and were razed in 1884. They made room for spacious parks and buildings as evidence of the architectural trends of classical modernism, such as the Art Nouveau originating from Vienna and the subsequent reform style . These include department stores , hotel buildings, savings banks , but also residential buildings.

After the First World War , when it grew steadily and new modern buildings were added, the city ​​was given the nickname Salon der Republik . Many of these buildings have been preserved and renovated. These include buildings designed by Hubert Gessner , Josef Gočár , Jan Kotěra , Oldřich Liska, Otakar Novotný, Jan Rejchl, Václav Rejchl, Bohumíl Waigant and Václav Weinzettl .

Hradec Králové is characterized by a differentiated urban structure. The main parts are the historic old town ( Staré město ) and the new town ( Nové město ). The old town is located on a mighty, elongated rock elevation, the original structure of which is barely recognizable due to centuries of urban development . The old town can only be reached by vehicle via two streets. Side stairs lead up. The old town center of Königgrätz with its ecclesiastical and civil buildings is located on the elevation.

Around this elevation are old barracks and warehouse buildings from the time of the Austro-Hungarian dual monarchy . The old town is bordered to the west and south by the Elbe and the Adler , which converge to the southwest not far from the ice stadium . Of the former floodplain landscape of both rivers, there is only a significant area to the north of the old town, which today has a park-like character. The river banks in the inner city area are paved in the manner of a canal throughout. Old meandering fragments of the Adler and Elbe are still present on the outskirts of the built-up area and represent natural protection zones.

The New Town can be reached from the Old Town via the architecturally remarkable Prague Elbe Bridge ( Pražsky most ). This district extends in a westerly direction and is traversed by a star-shaped network of streets running across it, which originates from this bridge. The central street ( Gočárova třída ) of the New Town leads to the station area, which it only touches laterally through a bend. In the course of urban development, the Prague suburb ( Pražské předmestí ), the Silesian suburb ( Slezské předmestí ) and the Moravian suburb ( Moravské předmestí ) emerged. Other settlements, former villages, were later incorporated. In the south lies the Nový Hradec Králové (Neu-Königgrätz) district with an old church building on an elevation.

The districts of Hradec Králové include:

Arcade around the market square

Side street of the market square

Description: In red, a gold-armored and crowned silver double-tailed lion standing to the left with a golden capital letter "G" in his paws.

The flag of Hradec Králové consists of three horizontal stripes white-yellow-red. The ratio of width to length is 2: 3.

Petrof pianos have been manufactured in the village since 1864 and have been exported since 1924. The family business is (as of 2008) with up to 5000 pianinos and 900 grand pianos per year, currently one of the largest piano producers in Europe in terms of the number of pieces.

Today's city center, made up of the old town and the new town, is surrounded by a broad inner ring road . The supra-regional connections meet this ring in a star shape. It thus reduces the flow of supraregional traffic through the city center.

Hradec Králové is on the European roads :

The D11 motorway from the direction of Prague ends southwest of Hradec Králové, there are plans to extend it in the future, past the city, towards southern Poland.

In addition, Hradec Králové is the intersection of various 1st and 2nd class streets:

The main train station of Hradec Králové is located west of the city center and is the intersection of the following railway lines:

There are connections to many cities in the Czech Republic via these lines.

The Hradec Králové airport is located a few kilometers outside north-northeast of the city center.

The 10th International Physics Olympiad took place there from July 7th to 17th, 1977 . 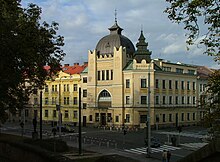 The historic city center was declared an urban monument reserve in 1962 .

The East Bohemian State Philharmonic Orchestra "Filharmonie Hradec Králové" was founded in 1978 and is one of the leading Czech symphony orchestras. It emerged from the city opera orchestra. Ondřej Kukal has been the chief conductor since 2002 (2007).

The Klicpera Theater is located in the old town . The building is in a small square north of the market. On the market square opposite the mighty Jesuit Church is the Modern Art Gallery . It is located in an architecturally remarkable building by the architect Osvald Polívka (designed in 1912).

The East Bohemian Museum on the inner-city bank of the Elbe is one of the most important buildings of modern architecture in this city .

In 2011, the city announced that it was seeking to be registered as a UNESCO World Heritage Site .

Lived and worked in the city