Pierrepont-sur-l'Arentèle is a French commune in the department of Vosges of the region Grand Est (2015 Lorraine ). It belongs to the Arrondissement Épinal and the municipality of Bruyères-Vallons des Vosges .

The community of Pierrepont-sur-l'Arentèle with 136 inhabitants (January 1, 2017) is located between the Vosges and the upper Moselle valley , about 20 kilometers northeast of the departmental capital, Épinal . The Arentèle , a tributary of the Mortagne, flows through the municipality . The area around the community shows little relief, it is mostly flat with a slight incline towards the west. The Arentèle takes on some tributaries in the Pierrepont area: Petite Arentèle, Ruisseau de la Soie, Ruisseau de Dracourt, Ruisseau des Roseau . The eastern half of the 6.23 km² community area is forested (340 ha), with the largest part being made up of the Le Gros Fays forest .

The districts of Dracourt and Le Chapuly belong to Pierrepont .

The neighboring communities of Pierrepont-sur-l'Arentèle are Sainte-Hélène in the north, Fremifontaine in the east, Bruyères in the southeast, Grandvillers in the south, Viménil in the southwest and Gugnécourt in the west.

The stone bridge over the Arentèle, which is over 700 years old

The name Pierrepont ( Petrus pons / Peters bridge or stone bridge ) has been documented for the village since 1247. The eponymous bridge over the Arentèle was the nucleus of the village, which gradually expanded to the west over the Kleine Arentèle ( la Petite Arentèle ). Pierrepont was part of the bailiwick of Bruyères , the residents were parish in the village of Destord , two kilometers to the north-west . This parish was part of the chapter of Saint-Dié . There was only one oratorio in Pierrepont . Pierrepont received its own parish only after the construction of the village church of St. Gangolf ( Saint-Gengoult ) was completed in 1850 . Because there was another municipality in Lorraine called Pierrepont , the municipality in the Vosges department was given the additional name sur-l'Arentèle by decree on October 4, 1882 . 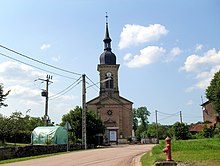 The connecting road from Rambervillers to Bruyères runs through the municipality . Other roads lead from Pierrepont to Nonzeville , Destord and Fremifontaine . The train station in the small town of Bruyères, nine kilometers away, is on the Arches - Saint-Dié line .

Commons : Pierrepont-sur-l'Arentèle  - Collection of images
Municipalities in the Arrondissement of Épinal (A – I)

Municipalities in the Arrondissement of Épinal (J – Z)