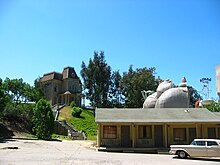 The Psycho house with the motel in the foreground

The Golden Globe will be presented on March 10th at the Cocoanut Grove in Los Angeles.

The Academy Awards will be held on April 4th at the RKO Pantages Theater in Los Angeles . The moderator is Bob Hope .

The festival takes place from May 4th to May 20th. The jury under President Georges Simenon selects the following winners:

The festival takes place from June 24th to July 5th. The jury under President Harold Lloyd selects the following winners:

The festival takes place from August 24th to September 7th. The jury selects the following winners: