Garrisons of the land forces of Austria-Hungary 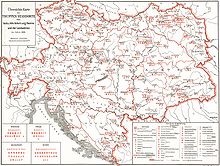 In the multiethnic state of Austria-Hungary , in contrast to countries with ethnic unity ( Germany / France ), the garrisons of the army were not mostly laid out along the borders, but were scattered across the entire country. This in order to be able to nip possible unrest or even riots in the bud immediately. For this reason, the individual units were in most cases stationed far away from home. In order to prevent possible fraternization with the population (which was encouraged in Germany - the IR 115 was in the same city ​​for almost 300 years ) the individual regiments of the common army were relocated at short intervals. It was not until around 1912 that this practice subsided somewhat. It was also standard not to place the regiments (with very few exceptions) completely in one city, but to distribute the individual battalions in order to achieve the greatest possible area coverage. (Missing or insufficiently dimensioned barracks also contributed to this.)

To a much lesser extent, however, this practice affected the units of the kk Landwehr and ku Honvéd (Király Honvédség) . (These regiments, consisting of only three instead of four battalions, were often concentrated in one location.)

Only the location of the regimental staff and / or the battalion staff (for the cavalry division staff) is given. It was quite common practice to accommodate individual companies , batteries or squadrons in other locations in the immediate vicinity. Suitable properties (larger manors, abandoned monasteries or other useful buildings) were used for this purpose (→ Kuk Hussar Regiment "Friedrich Leopold von Prussia" No. 2 )

Thus the arc of the 281 Austro-Hungarian staff garrisons stretched from Riva del Garda in the extreme southwest to Nisko in Galicia and from Kotor in Montenegro to Jägerndorf in Silesia .

Many cities that once belonged to Austria-Hungary (or the Kingdom of Hungary) and which are now in Romania , Slovenia , Italy , Croatia , Poland , Montenegro and other countries, can appear under their German, Hungarian or the customary name. The garrisons listed here bear the official name of the kuk military administration at the time, even if a German name was used (Fiera di Primiero instead of Primör).

The large cities of the Austrian half of the empire officially had a German name (Krakau), if they existed, otherwise the customary name was used (Czernowitz), whereby it must again be noted that today's western Ukraine (Ruthenia) was inhabited by Polish people and the former Polish ones Names may differ from those of today. The places formerly belonging to Veneto (in today's Croatia) kept their Italian names and were only renamed after 1918 (Spalato - Split). The cities of the Hungarian half of the empire, including those in today's Romania, Serbia or the then Upper Hungary called Slovakia, always had primarily (with very few exceptions) a Hungarian name (Székelyudvarhely - Odorheiu Secuiesc ).

Places that have no link on Wikipedia but could be localized received additional information (in brackets).

The term Division (abbreviated Div) in the Austro-Hungarian Army refers to an association of battalion strength (abbreviated Baon). The actual division , however, is called the troop division .

The information given here relates to the year 1914.