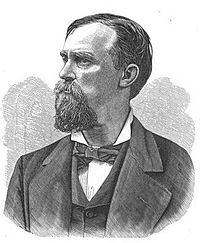 Charles Allen Sumner (born August 2, 1835 in Great Barrington , Berkshire County , Massachusetts , †  January 31, 1903 in San Francisco , California ) was an American politician . Between 1883 and 1885 he represented the state of California in the US House of Representatives .

Charles Sumner attended Trinity College in Hartford ( Connecticut ). After studying law and being admitted to the bar, he began to work in this profession. In 1856 he moved to San Francisco, where he published a daily newspaper in 1861. Between 1862 and 1864 he served as a captain in the Union Army during the Civil War . After completing his military service, he moved to Virginia City , Nevada, in 1864 . There he embarked on a political career as a member of the Democratic Party . Between 1865 and 1868 he was a member of the Nevada Senate , of which he was temporarily president. In 1868 he returned to San Francisco, where he was again a newspaper publisher.

In the congressional election of 1882 , Sumner was elected to the US House of Representatives in Washington, DC , in the then newly established sixth constituency of California , where he took up his new mandate on March 4, 1883. Since he was not confirmed in 1884, he could only serve one term in Congress until March 3, 1885 . There he fought the railway companies in his homeland. After the end of his time in the US House of Representatives, Charles Sumner practiced law again. He died on January 31, 1903 in San Francisco.