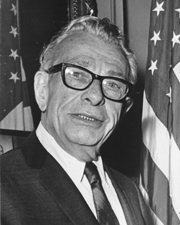 Everett McKinley Dirksen (born January 4, 1896 in Pekin , Illinois , † September 7, 1969 in Washington, DC ) was an American politician . As a member of the Republican Party , he represented his home state of Illinois in the United States House of Representatives from 1933 to 1949 and in the United States Senate from 1951 to 1969 . In the Senate he was also from 1959 until his death in 1969 chairman of the Republican minority group ( Minority Leader ) .

Dirksen was born in Illinois in 1896, where he grew up on a farm. His parents, Johann Friedrich and Antje Dirksen, were emigrants from East Frisia . He had two brothers, one of whom was his twin. His father died when Dirksen was nine years old. After graduating from school, he temporarily attended the University of Minnesota in Minneapolis , where he joined the US Army after the start of the First World War . There he served in 1918 and 1919 and rose to become second lieutenant . When he speculated on a washing machine business after his time in the army, he worked in his brother's bakery until 1927. His political career began in 1927 when he was elected to his hometown Pekin city council. There he was made head of the finance department.

In 1930 Dirksen tried to get a seat in the US House of Representatives for the Republican Party, but Dirksen was defeated in the party's internal primaries. He then tried again in the run-up to the next congressional elections in 1932. This time he was nominated and the election in his district he was able to decide in his favor. From March 4, 1933, he was represented in the house, where he was confirmed a total of seven times for a two-year term of office. In the house Dirksen was considered a moderate Republican, so he also supported the reform policy of the New Deal of President Franklin D. Roosevelt . In December 1943 he announced, surprisingly, that he would try to become president in the 1944 elections , but this failed: Dirksen did not receive any delegate votes at the Republican party congress. Was nominated New York Governor Thomas E. Dewey , the incumbent Roosevelt was, however, clearly inferior.

Dirksen decided not to run for his seat in the House of Representatives again, and consequently resigned from Congress in January 1949 . The reason for this was that his right eye was diagnosed with chorioretinitis , an inflammation of the retina, and he had to undergo an operation. 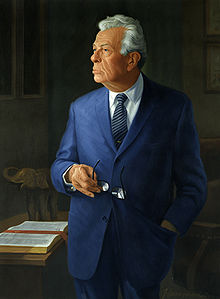 Painting in the US Senate by Everett Dirksen

After a recovery period of almost two years, Dirksen announced in 1950 that he would be running for a seat in the US Senate. In the November 1950 election, Dirksen was able to defeat the incumbent Democratic Senator Scott W. Lucas with 53.9% of the vote. On January 3, 1951, he joined the US Senate and represented the state of Illinois. In the election campaign, he had also supported the strictly anti-communist Senator Joseph McCarthy , who in turn supported Dirksen's election campaign. During the 1950s Dirksen initially supported McCarthy politically; However, when this came increasingly in the criticism, since he also began to accuse numerous prominent personalities of communism , Dirksen distanced himself from McCarthy. Dirksen was re-elected as Senator for Illinois in 1956, 1962 and 1968. Everett Dirksen was elected Chairman of the Republican Senate Group in 1959 to succeed William F. Knowland . When the Senate met on January 3, 1959, he assumed this office. As early as 1957 he was designated a whip .

In the following period, especially in the 1960s, Dirksen was considered to be one of the main actors in political life in Washington and an important voice in his party. From then on he advocated a more conservative course on economic issues, but supported foreign policy in the Cold War of Dwight D. Eisenhower and John F. Kennedy . Dirksen was also an advocate for the Civil Rights Act of 1964 , which erased public segregation across the United States. He was together with the Democratic group leader Mike Mansfield significantly at the end of a 57-Day speech ( filibuster ) involved, organized by conservative politicians of both major parties in the spring of 1964 to stop the law for desegregation. The bill was passed anyway and signed by President Lyndon B. Johnson on July 2 . On civil rights issues, therefore, there were hardly any differences between Dirksen, President Johnson and the Democratic leader and majority leader in the Senate Mansfield. He already had a good relationship with Johnson, which goes back to their time together in the Senate during the 1950s.

Dirksen was a staunch supporter of US policy on Vietnam in the 1960s. He spoke out in favor of military intervention in South Vietnam even before President Johnson decided to do so in order to prevent a Communist takeover there. When Johnson continued the engagement that had already begun under Kennedy, which culminated in the Vietnam War , Dirksen was one of the strongest supporters of this decision, even though the president was not part of his party.

Funeral service for Senator Dirksen in September 1969, can be seen u. a. President Nixon 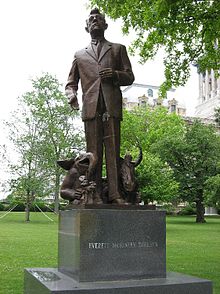 In August 1969 Senator Dirksen was surprisingly diagnosed with lung cancer, whereupon he underwent an operation in Washington. After surviving this, he nevertheless died on September 7, 1969 at the age of 73 after pneumonia had developed as a result of the treatment . After his death, a memorial ceremony was held for him in Washington.

Dirksen was married to Louella Carver Dirksen, with whom he had a daughter. From 1951 until her death from cancer in 1993, she was married to the former Republican US Senator from Tennessee, Howard Baker .

In 1972, three years after his death, the Dirksen Senate Office Building , an office building of the US Senate in Washington, was named after him in his honor. A statue was also dedicated to him in Springfield, Illinois .