The Chicago Wolves are an ice hockey team in the American Hockey League (AHL) from Chicago , Illinois . The Wolves play their home games in the 16,700-seat Allstate Arena . The team was founded in 1994 as a franchise of the International Hockey League (IHL) and seven years later was accepted into the AHL. The team's greatest successes include winning the Turner Cup twice in the IHL in 1998 and 2000 and the Calder Cup in the AHL in 2002 and 2008. Like all AHL teams, you work closely with a team from the National Hockey League (NHL); in this case the Vegas Golden Knights .

The Allstate Arena , home of the Wolves

When they were founded, the Chicago Wolves were part of both the IHL teams and the minor league teams, with the highest average attendance in North America. Nevertheless, it was only in the early years that it was possible to achieve such a high average that more than half the capacity of the Allstate Arena could be filled. After the dissolution of the IHL and Chicago's move to the AHL, the average initially remained constant at over 8,000 spectators per game, but this mark has been missed in every season since the 2005/06 season. Winning the Calder Cup in the 2007/08 season could n't change that. In the 2009/10 season, with 7,963 spectators, significantly more fans attended the Wolves' home games, but after more than half of the home games , the average attendance in the following season was only 6,660, which means an occupancy rate of less than 40%.

The Chicago Wolves are owned by the entrepreneur Don Levin , who founded various holding companies that are represented in numerous countries. The franchise has been the Vegas Golden Knights farm team from the National Hockey League since 2017 . Previously, it had been the St. Louis Blues farm team since 2013 . From 2001 to 2011 the Wolves served as a farm team for the Atlanta Thrashers , then for two years the Vancouver Canucks . Before that, there was a collaboration with the New York Islanders from 1999 to 2001 . The franchise itself also has farm teams that are active in various leagues such as the ECHL . The Charlotte Checkers , with whom they worked from 1995 to 1996, were selected as the first farm team . Then from 1996 to 1998 a cooperation with the Peoria Rivermen from the ECHL took place. Later contracts were signed with the Quad City Mallards and Muskegon Fury from the United Hockey League . From 2004 to 2011 there was a collaboration with the Gwinnett Gladiators .

The Chicago Wolves have won the Turner Cup and Calder Cup twice since the franchise was founded . In addition, the team collected various other trophies and successes. The Turner Cup was won for the first time in the 1997/98 season, followed two years later by winning the Fred A. Huber Trophy as the team with the highest points in the regular season in the International Hockey League and winning the Turner Cup again. After the dissolution of the IHL, the team won the Calder Cup in their first season in the AHL. In addition, the Robert W. Clarke Trophy was won in the same season as the best team of the Western Conference finals . 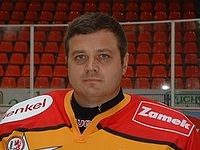 Andrei Trefilow won the 2000 Norman R. "Bud" Poile Trophy as the best player in the playoffs. With a catch quota of 95%, he was instrumental in the Wolves' Turner Cup win.

During their time in the International Hockey League , eight Chicago Wolves players won an individual award. After the 1997/98 season, the Russian Alexander Semak was the first to be awarded the Norman R. "Bud" Poile Trophy as the most valuable player during the Turner Cup playoffs . Two years later, his compatriot Andrei Trefilow was honored with this trophy, who had contributed to winning the Turner Cup with his achievements. Three players received the Leo P. Lamoureux Memorial Trophy as the best points player of the regular season. After Rob Brown was the first Wolves player to win this award after the 1995/96 season and received the trophy again the following year, two other players, Steve Maltais and Steve Larouche , managed to lead the international hockey league. Rob Brown set the Wolves record with 52 goals, 91 assists and 143 points in 79 games in the 1995/96 season.

Larouche also won the John Cullen Award in the 1999/2000 season . After he sustained a knee injury in December 1998 and was thus absent for the rest of the season, he surpassed the 100-point mark the following year and won the Turner Cup with the team. Steve Maltais was in the 1999/2000 season in all Wolves games and scored over 100 points. For this achievement he was awarded the Ironman Award . In addition, three players were named IHL Man of the Year for their commitment to society . Tim Breslin , Chris Marinucci and Wendell Young each won the Turner Cup at least once with the team.

Since the franchise was accepted into the American Hockey League, eleven Chicago Wolves players have won one of the individual AHL awards .

In 2002, Pasi Nurminen was the first player in franchise history to win an individual award in the AHL and was awarded the Jack A. Butterfield Trophy as MVP of the Calder Cup Playoffs . In the playoffs Nurminen had ousted the previous goalkeeper Norm Maracle out of the gate and was instrumental in the Chicago Wolves' first Calder Cup win with a catch quota of 93.5 percent. Even Jason Krog won this trophy when he led the team in the 2007/08 season with 36 points in 24 playoff games for the second Calder Cup win. In the 2006/07 season, Darren Haydar scored 122 points in the regular season, making him the best scorer in the league. Haydar received the Les Cunningham Award for these outstanding achievements . A year later, his strike partner Jason Krog also won this award after he had also scored over 100 points.

In addition to Haydar and Krog, Steve Maltais also won the John B. Sollenberger Trophy as the best point player of the regular season. While Maltais only needed 86 points to complete the 2002/03 season as top scorer, Haydar and Krog came in the 2006/07 and 2007/08 seasons on a yield of over 100 points. Rookie Brett Sterling managed to get stuck in the Wolves' squad in his debut season and to convince with strong performances. In the 2006/07 season he won both the Willie Marshall Award as top scorer of the regular season, for which he had contributed with 55 goals, and the Dudley "Red" Garrett Memorial Award as best rookie of the season. In 2004 Kurtis Foster , who had attracted public attention due to his special commitment, received the Yanick Dupré Memorial Award .

Selected player records of the franchise over the entire career as well as over individual seasons are listed below.

The Wolves started their debut season with Gene Ubriaco as head coach. Ubriaco led the team in the International Hockey League with a nearly balanced record of 34 wins and 33 wins in the playoffs. In the following season Ubriaco was replaced 22 games before the end of the regular season by Grant Mulvey , who led the team with 88 points to second place in the Midwest Division. After a first-round win against the San Francisco Spiders , the team lost in five games against Las Vegas Thunder . In the course of the 1996/97 season, after 65 game days, there was another change and Gene Ubriaco was interim coach for two games before he was replaced by the Finn Alpo Suhonen , who led the team again in the finals.

After this again ended prematurely, he was no longer employed for the following season with the Wolves. The Canadian John Anderson , who won the Colonial Cup last year with the Quad City Mallards, was signed as the new head coach . In his first season, Anderson set a new franchise record with the team and took second place in the league with 113 points, only the Long Beach Ice Dogs were more successful with 115 points. After victories over Manitoba Moose , Milwaukee Admirals , Long Beach Ice Dogs and Detroit Vipers , he won the Turner Cup with the team for the first time . Two years later, Anderson won the second Turner Cup in franchise history with the Wolves. The team prevailed against the Grand Rapids Griffins in six games in the final series . The following year the team failed in the finals against the Orlando Solar Bears . After the International Hockey League was dissolved after the 2000/01 season, the team was accepted into the American Hockey League .

John Anderson remained in the following years as head coach of the Wolves in office and won the Calder Cup with the team in the 2001/02 season after a success in the finals against the Bridgeport Sound Tigers . In the following three years they made it to the finals, but the team was denied further successes. In the 2005/06 season the play-offs took place for the first time without the Wolves, two years later the team won the second Calder Cup, this time after a success in the final series against the Wilkes-Barre / Scranton Penguins . John Anderson left the team after this success and became head coach of the Atlanta Thrashers . The vacancy as head coach in Chicago was filled by Don Granato , Tony Granato's brother . After being in the 2008/09 season had failed to qualify for the playoffs and was started with five defeats in their first six games into the following season, was made for him in October 2009, notice. As his successor, Don Lever was introduced, who had previously trained the Hamilton Bulldogs . After the 2010/11 season , Lever was no longer employed. On August 1, 2011, Craig MacTavish was introduced as the successor. The following season the Wolves hired Scott Arniel , the former head coach of the Columbus Blue Jackets , after MacTavish had accepted a position on the board of the Edmonton Oilers .

In the history of the Chicago Wolves, there have been eight different players who have held the position of team captain. 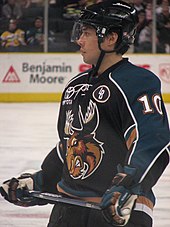 For the 1994/95 season, the attacker Steve Maltais was named the first team captain in franchise history. After serving in this position for two years, he was followed by veteran center Troy Murray , who had spent much of his career with the Chicago Blackhawks . After the end of his career, Steve Maltais was again entrusted with this task. After another three years he was replaced for one season by defensive player Kevin Dahl . After his departure, Maltais again took over the office of team captain. He ended his active career in the summer of 2005, after which Derek MacKenzie was given responsibility. The Wolves completed the 2006/07 season without a permanent captain, before Darren Haydar was entrusted with the execution of this office for the following season . He was followed by Jamie Rivers , who left the team after a year. Finally, for the 2009/10 season, the Wolves gave attacker Jason Krog the position of team captain. After he left the organization for Europe after two years, the experienced defender Nolan Baumgartner took on the role of team captain. After the 2011/12 season Baumgartner ended his active career.

So far, two jersey numbers have been officially banned by the Chicago Wolves. Goalkeeper Wendell Young was the first player to receive this honor. During his active career from 1994 to 2001 he worked for the Wolves and won the Turner Cup twice with the team during this time . On December 1, 2001, his jersey number 1 was banned by the Wolves and has not been given to any player since then. The attacker Steve Maltais , who was active for the team from 1994 to 2005, was also honored with this honor. Maltais won three championships with the team, in addition to two successes in the Turner Cup in the 2001/02 season, the Calder Cup . In the franchise's inaugural season , he was named first team captain and served a total of nine seasons. With 839 appearances, 454 goals, 496 assists, 950 points scorer and 1061 penalty minutes, he holds all of the Wolves' relevant franchise records. His number 11 was officially banned on April 15, 2006.

Franchises of the American Hockey League

Franchises of the International Hockey League