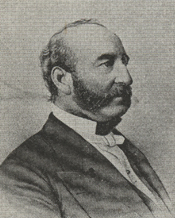 George Washington Houk (born September 25, 1825 in Cumberland County , Pennsylvania , †  February 9, 1894 in Washington, DC ) was an American politician . Between 1891 and 1894 he represented the state of Ohio in the US House of Representatives .

In 1827, George Houk and his parents came to Dayton , Ohio, where he later attended public schools and the E. E. Barney Academy . After a subsequent law degree and his admission as a lawyer in 1847, he began to work in Dayton in this profession. At the same time he embarked on a political career as a member of the Democratic Party . From 1852 to 1853 he was a member of the Ohio House of Representatives ; in 1860 and 1876 he took part as a delegate to the respective Democratic National Conventions . In 1888 he ran for the US House of Representatives without success.

In the congressional elections of 1890 , however, Houk was elected to the US House of Representatives in Washington, DC in the third constituency of Ohio , where he succeeded Republican Elihu S. Williams on March 4, 1891 . After being re-elected, he could remain in Congress until his death on February 9, 1894 . He was married to Eliza Thruston, with whom he had five children.