from Wikipedia, the free encyclopedia
This is the spotted version , flagged on August 21, 2020 . There are still template and file changes that need to be viewed.

The title of this article is ambiguous. Further meanings are listed under Schmidt (disambiguation) .

Blacksmith on a frieze at the New Town Hall Hanover

Like most common German-language family names, Schmidt is derived from a profession , here from that of blacksmith . 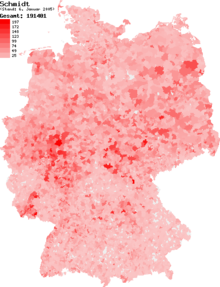 Distribution of the surname Schmidt in January 2005

The most common variants are also listed as separate names / spellings in some lists. They are Schmitt (approx. 26th place), Schmitz (approx. 28th place) and Schmid (approx. 32nd place).

Because of the widespread use and the regionally different spellings, the name spreads out in numerous forms. In the Rhineland the spelling Schmitz is predominant. In the Rhenish-Franconian area the Schmitt variant is common , in the Swabian and Bavarian Schmid .

The name Schmitz is also common in East Belgium . Rarer variants are Schmidtke , Smid and Smidt in Northern Germany, Schmied (especially in Bavaria and Switzerland) and especially rarely Schmit or Schmith . The name Faber or Fabri also means blacksmith and usually goes back to a Latinization of corresponding proper names such as Schmidt or similar.

Designations for the profession of blacksmith are used as family names in numerous languages. The English name Smith is the most common name in most of the countries in the English-speaking world. Other correspondences are Smid in Dutch , Kowalski in Polish , Kovacev, Kovacic or Kovacevic Kovac on Serb or Croat , Kovács Hungarian (transcribed: Кузнецов Kuznetsov ) on Russian , Herrero in Spanish , Lefebvre or Lefèvre in French , Demirci in Turkish , Ferreira in Portuguese and Ferrari in Italian .